Could you provide our readers with a very brief overview, say key statistics describing Ukrainian libraries (such as the number of libraries, librarians or holdings)?

Have any library buildings in Ukraine (according to your knowledge, of course) have been destroyed or damaged during the war so far? E.g., a BBC article from April 2022 mentions that a children’s library in Chernihiv has been badly damaged…

The Ukrainian Library Association and the charitable foundation Library Country have launched a collection of data on the damage and losses of the libraries in this war.

Now we do not have much information. It is just that people, librarians, are under Russian fire, often without light, heat, water or any communication. But we continue to collect the information through a form that can be filled out anyone, and from other sources.

All libraries in Mariupol, Bucha, Gostomel, Irpіn, Borodianka are destroyed, because these cities are completely destroyed.

Unfortunately, the number of such libraries increases every day.

How do Ukrainian libraries manage to provide their services in the current emergency?

In regions where there are no active hostilities, libraries work as usual – serving users, holding various events. But they are working particularly hard, as many new IDPs (internally displaced persons) have emerged in these regions. Libraries are open to everyone. Unfortunately, most of the libraries in the areas where active hostilities are taking place work online – they do video reviews of books, conduct online events, programming courses, language learning, and read books aloud. Some of them open for literally a couple of hours a week so that readers can exchange books they have read.

How else do Ukrainian librarians help their fellow citizens (for example, internally displaced persons or the army)?

Displaced persons are provided with comprehensive informational assistance on settlement, registration with local self-government bodies, receipt of financial assistance, job search and other issues related to the organization of their accommodation and adaptation. In many libraries, information support centers, Ukrainian language courses are opened for these people, various courses are held, including primary care, computer literacy, workshops for adult migrants and their children.There are psychological services where you can get free consultations from library psychologists, art therapy and library therapy activities that help people overcome the stresses of war. In addition, librarians are active in volunteering – making camouflage nets for the Armed Forces of Ukraine and Territorial Defense, sewing Ukrainian flags and camouflage clothing, collecting products and forming food packages, sculpting dumplings, making energy bars, collecting Ukrainian books for European libraries, sort out humanitarian aid, organize and direct volunteer flows. Ukrainian librarians, like all Ukrainian people, are doing everything to bring our victory closer!

Are there any online materials which Ukrainian librarians use when working with children and which could possibly be reused by libraries in other countries?

Below this interview, you can find a list of online resources.

What does your library association focus on now?

During the war, the work of the Presidium and the Executive Office of the Ukrainian Library Association was reformatted. We continue to fulfill our main tasks of a professional organization – we take care of membership, keep in touch with our members and partners through the ULA web portal, social networks and emailing. We have moved some of our important annual international conferences to our victory, but we hold professional webinars, including with foreign partners.

We had to change the emphasis in the work plan for 2022. After all, innovative models of library activities in peacetime and in wartime look different. But these are also library innovations that we promote – work with migrants, new forms of combating misinformation, support for the cyber troops of Ukraine, bibliotherapy for war victims, including children, expansion and coordination of social, humanitarian, volunteer work for the needs of the armed forces and territorial defense.

Our communication with foreign partners has significantly increased – every day we receive many letters of support, proposals for cooperation and assistance to librarians in Ukraine and those who are forced to flee the war abroad. We have prepared many appeals to our partners – members of IFLA and the world library community to stop working with Russian librarians, because they, instead of telling the truth about the war in Ukraine, distance themselves from the harsh reality and even support library conferences in the occupied Crimea.

Therefore, the activities of the Ukrainian Library Association are currently very intensive and we are extremely grateful to our colleagues from all over the world for their support.

Are there – I mean in Ukrainian cultural heritage institutions in general – any specific activities going on which focus on digital preservation? I have heard that these institutions try to find international partners who would be willing to back up their digital data and help save them for future generations.

Even before the war, Ukrainian libraries were engaged in digitizing their collections. However, this work has not been sufficiently coordinated at the national level and we do not yet have such global projects as the National Digital Library. The Ukrainian Library Association has repeatedly appealed to the Government of Ukraine and relevant ministries with proposals and a professional vision of the process of digitization of library institutions and collections.

With the beginning of the war, the need to preserve electronic library catalogs, digital collections, websites and other digital resources became very urgent. Here again, foreign partners from national libraries, universities and commercial organizations in other countries came to our aid, offering free volunteer help and their own servers to store information.

Is there anything else you would wish to share with our readers?

The most difficult situation is in libraries which are located in areas where active combat is going. We have lost contact with most of these libraries. Many of them have been damaged or destroyed. But there are examples when libraries try to support their users even during street fights and work two or three hours a day – borrowing and returning books.

In the conditions of martial law, the use of remote forms of work in libraries became relevant. Librarians try to keep their user audience by providing online services. Libraries located in the temporarily occupied territories also try to keep working – they support their users with up-to-date information through online forms, which is especially important in the context of the information blockade, which was created by the occupiers immediately when taking control of settlements. As a rule, the first thing that happens in the occupied towns and villages is the disconnection of mobile communications, the disconnection of Ukrainian television. Therefore, the internet remains the only communication channel through which librarians try to communicate the state of affairs and support the residents of their communities.

Thank you for the interview!

Editorial note: On April 6th, 2022, Oksana Brui, together with her colleagues, took part in a webinar entitled Voices from Ukraine: Ukrainian librarians in the struggle against Russian invasion! A recording from this webinar is available through YouTube: 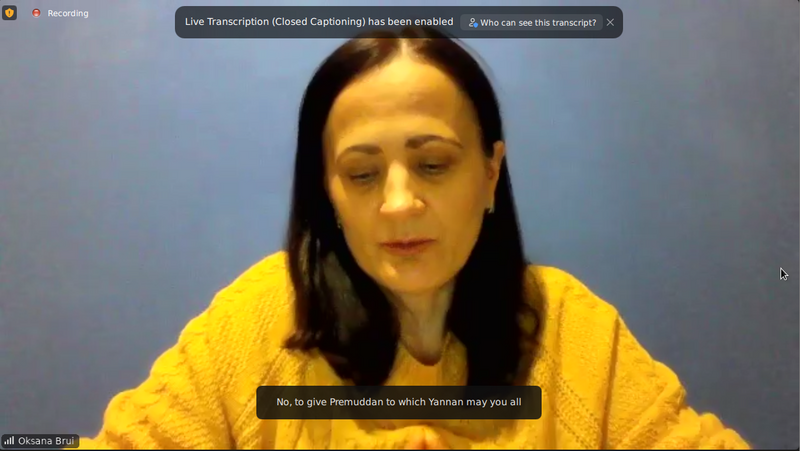